A basic tool that was designed as a spate of shorted boards came in - not our usual supplier I have to admit.

I needed to find the short that was on the board, it was on a power rail so it had a few taps on it.  I wanted a milliohm meter and I did not have one - a quick look on Farnell but the £600.00 was a little out of my pocket.  I thought I could make something simpler.

I tried a lot of probes - this does need a 4 wire system (Kelvin) to measure ( 2 wires to carry the current and 2 wires to measure). What I did manage to do was to add on a speaker with an oscillator so you can hear the change in resistance too ( see more later.)

A Simple Circuit (it has been upgraded from this circuit) that measures the small voltage differences across a copper track on a PC board, it uses 3V from 2 x AA Batteries (make sure they are good with our loaded battery tester), the 2 Probes (more later) are placed in contact to the track where the initial 3V ( watch out for circuits that could be damaged - this is really for blank PCBs) is placed on the track, a constant current of 100mA is applied and voltage is seen and amplified by the op amp. There is a residual resistance of about 15mR when shorted and will work up to about 200mR. I have found this works for what we have. The addition of a simple oscillator and min speaker from PUI allows the use of the varying frequency to understand where the short is.

Ok,  so this was fun... I wanted to use some nice 4mm pin probes that Farnell had, but the 4mm connections increased the resistance to such an amount it was unusable. The connection was intermittent at that level and gave varying results. I settled for our old friend 1mm solid core house wiring (you could try 2.5mm). It did not add too much to the resistance (4mR) to the overall resistance and it does mean you can trim the  ends to a point with a side cutter quite nicely. 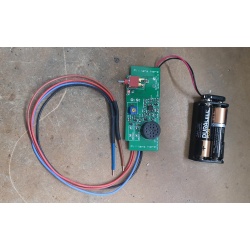 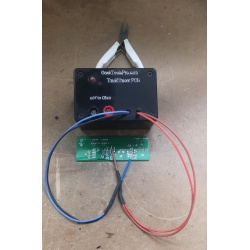 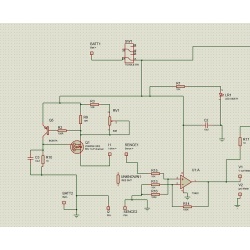 TraceTracker: fully boxed in our lovely CNC cut ABS box (No battery and I will make you your lovely solid core probes - colours may vary!)
£ 75.00 (£ 62.50 excl VAT)
Add to cart